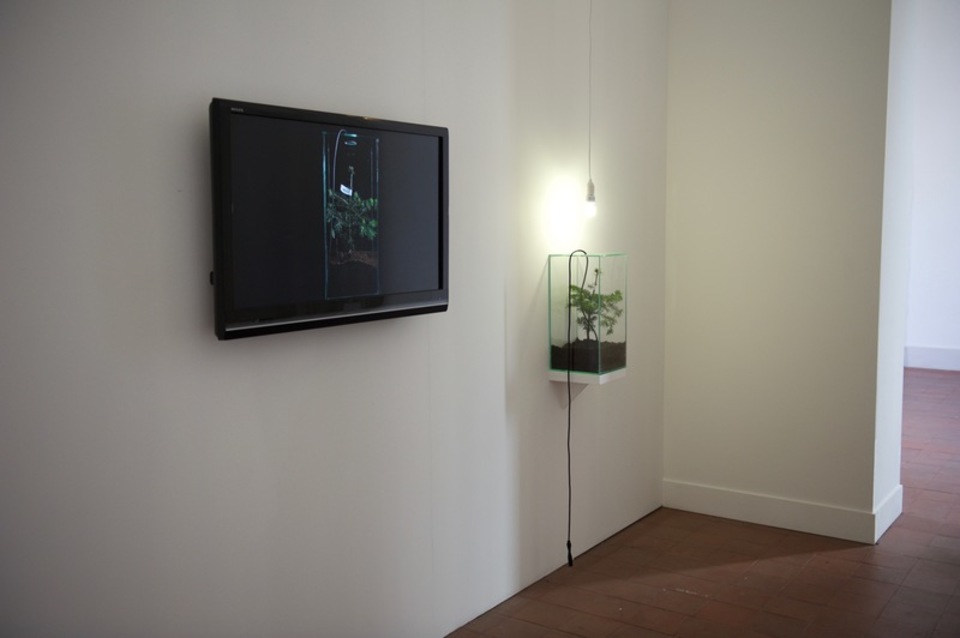 The video-based work 02.205 is done by Christian Brems in collaboration with Laura Beloff and with scientific advice by Frank Veenstra. The work has been produced under the umbrella of Hybrid Matters and exhibited in the Hybrid Matters exhibition at Kunsthall Nikolaj in Copenhagen.

02.205 is an artistic-scientific videowork that investigates, speculates and broadly communicates recent findings in the field of bio-acoustics; “the branch of science concerned with sounds produced by or affecting living organisms, especially as relating to communication. (reference 1)

Here is a short extract of the 7-minute video:

The conversation between the tree and computer is facilitated through novel research in bio-acoustics:

Computer talking to plant: Recent research has shown that plants are able to receptively detect and react to the purely acoustic sounds of running water by moving its roots towards it. (reference 2, reference 3, reference 4, reference 5) For 02.205, a hydro-phonic 'alphabet' (speech of the computer) has been created by putting together samples of running water sounds that the plant can then receptively listen to.

Plant Talking to computer: Further research has found that plant roots emit irregular high frequency clicking sounds, UAE’s (Ultrasonic acoustic emissions), in the humanly inaudible sonic range between 20-300 kHz. (reference 6, reference 7). The clicking sounds in the videowork (speech of the tree) are actual ultrasonic recordings we made on the roots of the tree. These clicks have then been down-sampled into the human range of hearing below 20 kHz.

Although the latter research on plants acoustic emissions is highly contested and yet has to be scientifically validated or falsified as a communicative tool, (reference 5) this new research in bio-acoustics open up a novel potential for understanding the acoustic receptions and emissions in plants - and through this consider the possibility of sonic forms of 'communication' in plants.

Scientific investigations and artistic speculations: The videowork simultaneously positions itself as a piece of scientific research in bio-acoustics, and as an artistic project speculating further on these findings. In the creation of the work we recorded the tree in a studio where a sound mixer measuring up to 100 kHz was connected to piezo-electric sensors that was attached to the roots of the cloned Abies Nordmanniana tree shown in the video and in the exhibition.

From these recordings we found ultrasonic clicks in the area between 60-75 kHz that could not be measured anywhere else on the tree. We further made sure that these clicks were not generated within the recording equipment. In our research of bio-acoustic articles we have yet to find any equally specific descriptions of the technical recording process. The clicks heard in the video are these ultrasonic recordings that have been down sampled 4 times into the human range of hearing below 20 kHz. Other than the down-sampling the recordings are left completely unmodified.

The speculative side of the project lies in the ‘what if' scenario that materialize as a conversation between G.A.R.I (General Artificial Resonance Intelligence) that is communicating with the tree through the purely acoustic sounds of water. And the Abies Nordmanniana tree, that is responding with the ultrasonic clicks. The computers voice, based on the research described above becomes a speculation grounded in existing facts.

Fiction as a tool for opening up research: The conversation and written subtitles are, of course, completely fictional. But the scenario itself, of a ‘listening and talking’ plant', is grounded in the research. The intention herein - intertwining factual research and fictional speculations - has been to position the viewer in a state that blurs the distinction between the two. Inspired by the methods in critical design, the videowork attempts to create a space of associations for the viewer, making the visions from the artistic research appear as scenarios of a potential, albeit speculative future.

Video displayed at Nikolaj Kunsthall with the actual recorded tree beside it. 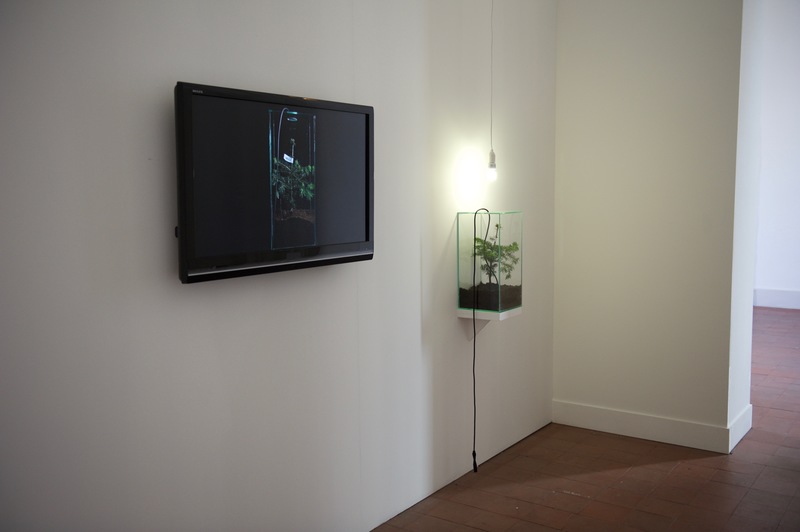 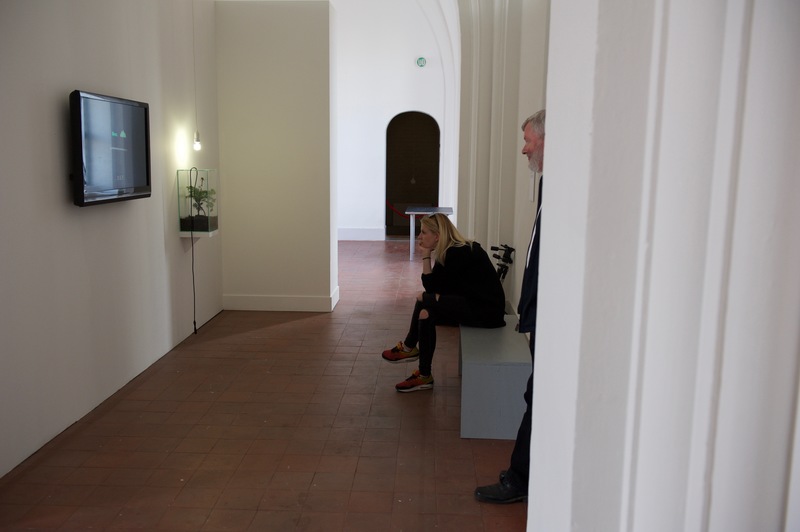 Research questions in the age of the anthropocene: In the videowork a tacit question to the researcher (as well as to the public) is: are we able to grasp the idea of ‘communication’ without colonizing the idea through an anthropocentric conceptual framework of our own human communication? Are we able to avoid Disney-fying other living organisms such as plants with human feelings such as hope and fear? The video raises the question by following the trajectory of ‘human communication’ but inserting different ‘glitches’ and gaps in the conversation, that reveal the inability for the two to communicate on absolute human terms.

In a research-based sense this asks the question of how researchers are able to handle the concept of communication as something deatached from our own. What is required to understand the logic of communication in artificial intelligance and plants on their own terms?